The #PoliceCrackdownBill and the Fight Ahead 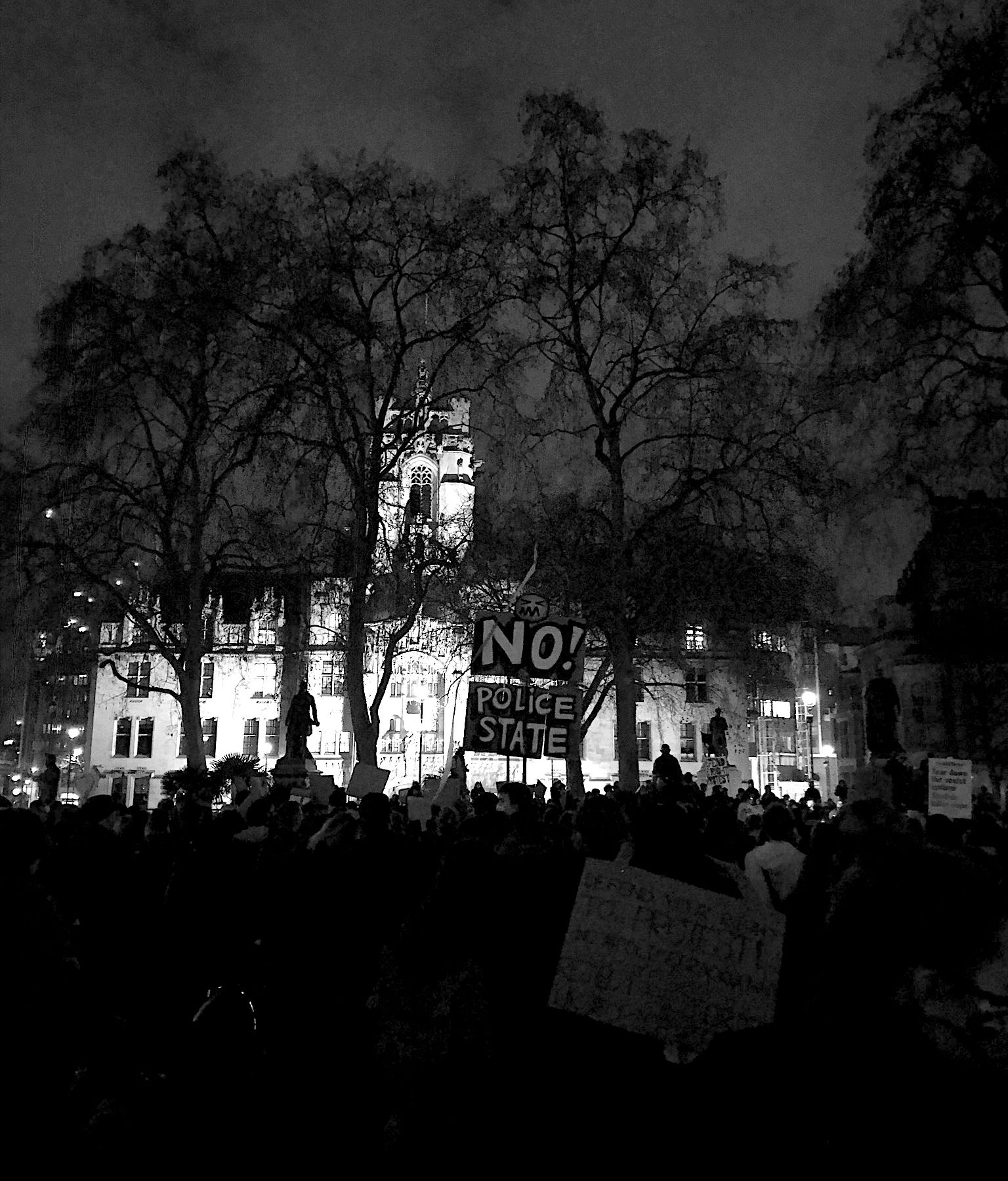 On 16 March, the House of Commons undertook the second reading of the Police, Crime, Sentencing and Courts Bill. People assembled in Parliament Square, rightly and indignantly protesting this lurch towards authoritarianism. It is testament to popular pressure that even Keir Starmer’s Labour Party was forced to grow a spine and oppose this bill. The intransigence of Sisters Uncut and other protestors, adamant that Sarah Everard’s life will be mourned, and refusing to be intimidated off the streets by the police, created a huge fall-out for the police and a legitimacy crisis for Priti Patel’s Bill. Despite this, with the Tories’ thumping 78 majority and having shoehorned it through Parliament without the usual months of scrutiny, the bill passed. This week, therefore, is not the end of this cycle of struggle, but the beginning.

An enormous bill, encompassing 296 pages of detail and a wide variety of legislation, it gives police the powers to prevent protest, and would hand out ten-year prison sentences to individuals caught defacing statues. It also extends stop-and-search powers and furthers the social exclusion and state violence against Gypsy, Roma and Traveller communities. Firebrand socialist Zarah Sultana MP has described it as having ‘more than a hint of the dystopian about it.’

If we want to defeat the bill, we must make it completely impracticable as an enforceable piece of legislation. This will require mass mobilisations from an alliance of militant campaigns such as Sisters Uncut and Black Lives Matter UK, supportive trade unions such as Unite, UCU and the FBU, and critically, a socialist left, finally prepared to put behind it the trauma of Corbynism’s demise. Alongside this kind of show of strength, and perhaps a harder task, we will need to win an argument across society. In a recent YouGov poll, 59 per cent agreed that ‘protests – or vigils or marches – should not be allowed during the pandemic’. Given this, we must put forward a vision for a post-Covid future.

The pandemic will be with us for the long haul and forms a critical part of the pretext for this government’s authoritarian crackdown. We have to tackle it head-on. We know, for example, from the experience of the global Black Lives Matter uprisings last year, as well as from scientific research, that socially-distanced, masked protests don’t lead to outbreaks.

We also know that, despite record levels of state spending, when it comes to the racialised and gendered organisation of the economy, the privatisation of public space, and the inadequacy of social support from the state, the Tories have presided over social murder on an unprecedented scale. Not only have over 120,000 people died, but over 150,000 individuals have been abandoned to suffer the effects of long-covid with no support, and some 828,000 people have fallen off the payroll. On every social measure, ethnic minorities have been disproportionately impacted by the pandemic. We must connect the past year of negligent government to the fight against the #PoliceCrackdownBill.

This will be a long struggle, it will require multiple pathways by which to confront the government’s assault, and it will meet many obstacles in the form of repression and neo-McCarthyism, but we can win. The battle for political democracy and the desire to make the social struggle the bedrock of these confrontations is absolutely critical to the development of a radically democratic and universalist socialist project. As well as the many who have already mobilised, there are thousands of people, once drawn to Corbynism and stripped of any meaningful agency within Starmer’s Labour Party, who might now transform their mourning into organising against the state. It is in this direction that socialists should now turn.