On The Fucking of A Dead Pig’s Face 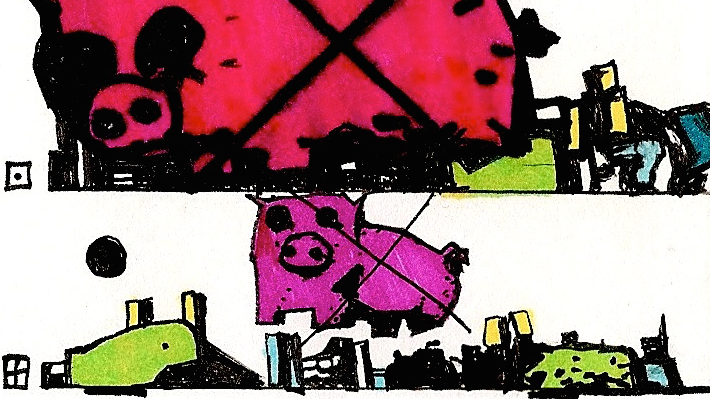 We know this about Western democracy: you can fuck beef. If you have a dick no-one can stop you from placing it privately in meat.

A cow certainly not. That would be a direct violation of section 69 of the Sexual Offences Act 2003 and zooerasty. And according to section 70, you shouldn’t fuck the dead.

Here is the subtle point: adding necrophilia to bestiality doesn’t make it ok but it does make it legal. This was the defence offered by a Canadian hunter who fucked deers – ‘I shot them first’. He got off.

As an American and therefore an outsider I can say it is unfortunate your Prime Minister is British. If any GOP leader was caught fucking pig’s faces their defence would be simple: ‘Of course I did. This is how we do things in the broad true red parts of this proud nation of which you effete journalistic elites know nothing: if you should come upon a slain hog, on your dusty ranch or while selling an economically-priced SUV or while enjoying legacy wealth with your family, you take its head and fuck its face. Otherwise why even have a country?’ And the electorate would simply absorb the new information that half the country fucks dead pig faces, then cry. That probably goes for Australia, too.

This is not the Tory way: their public positions don’t, taken together, adumbrate a way of life that any real person could actually have anywhere, much less on a bunch of islands whose main export is people singing about drugs.

The leading theory about the* encounter is pure Levi-Strauss: high-born Tory schoolboys undergo collective ritual humiliation to ensure mutual loyalty on pain of having their unseemly amours revealed later in life. But this can’t be true, as Cameron has said, ‘I believe deeply in public service’; not ‘I believe deeply in service mostly to anyone who watched me screwing that head that time.’

According to Rosman and Resnick’s 1989 study, the majority of those who fuck the dead are motivated by a desire for (1) ‘an unresisting and unrejecting partner’ but other common motivations include; (2) ‘a desire for comfort or to overcome feelings of isolation’; (3) the desire of a perpetrator to raise their low self-esteem by demonstrating power over a corpse; (4) simple sexual attraction to the dead; and (5) the desire for a reunion with a lost partner.

What has to be said about all of these options is that they are touching. The first suggests a Cameron not impossibly more depraved than the one we know, but about as plausibly deprived. The last hints at a current of tragic backstory that Ashcroft and Oakeshott were perhaps underequipped to investigate or insufficiently sensitive to appreciate. The third, however, (experienced by twelve per cent of thanatophiles) accords best with the public Cameron: it is difficult to imagine a way in which deciding to bone a pig in its dead face is actually much weirder than being a rich white guy already and then deciding that what you really needed to do was get yourself and your family really stressed out telling 64 million people what to do every day.

You cannot fuck a dead person because, even soulless, we hold it sacred and dignified.** You cannot fuck a living animal for more complex reasons: while, yes, there’s a consent issue, you can kill one or eat one without consent; and, if you run a circus or a farm, you pretty much have to jerk them off; so really it boils down to, on the downside, it’s gross and on the upside, there isn’t one.

There is no extant philosophical exegesis as to how any of that is in any way mitigated if the pig is dead.

If he was thinking, Cameron*** was probably thinking only of the total lack of consequences: ‘It’s only a pig, and it’s dead already. I want things, and even if it could want anything, it’ll never get it. Why not straddle and master it as I will one day straddle and master the carcass of these Isles? Only one of us is special, and there are no consequences.’

**Yeah, ok, except in Kansas and Lousiana.