Getting Dressed for a Pandemic 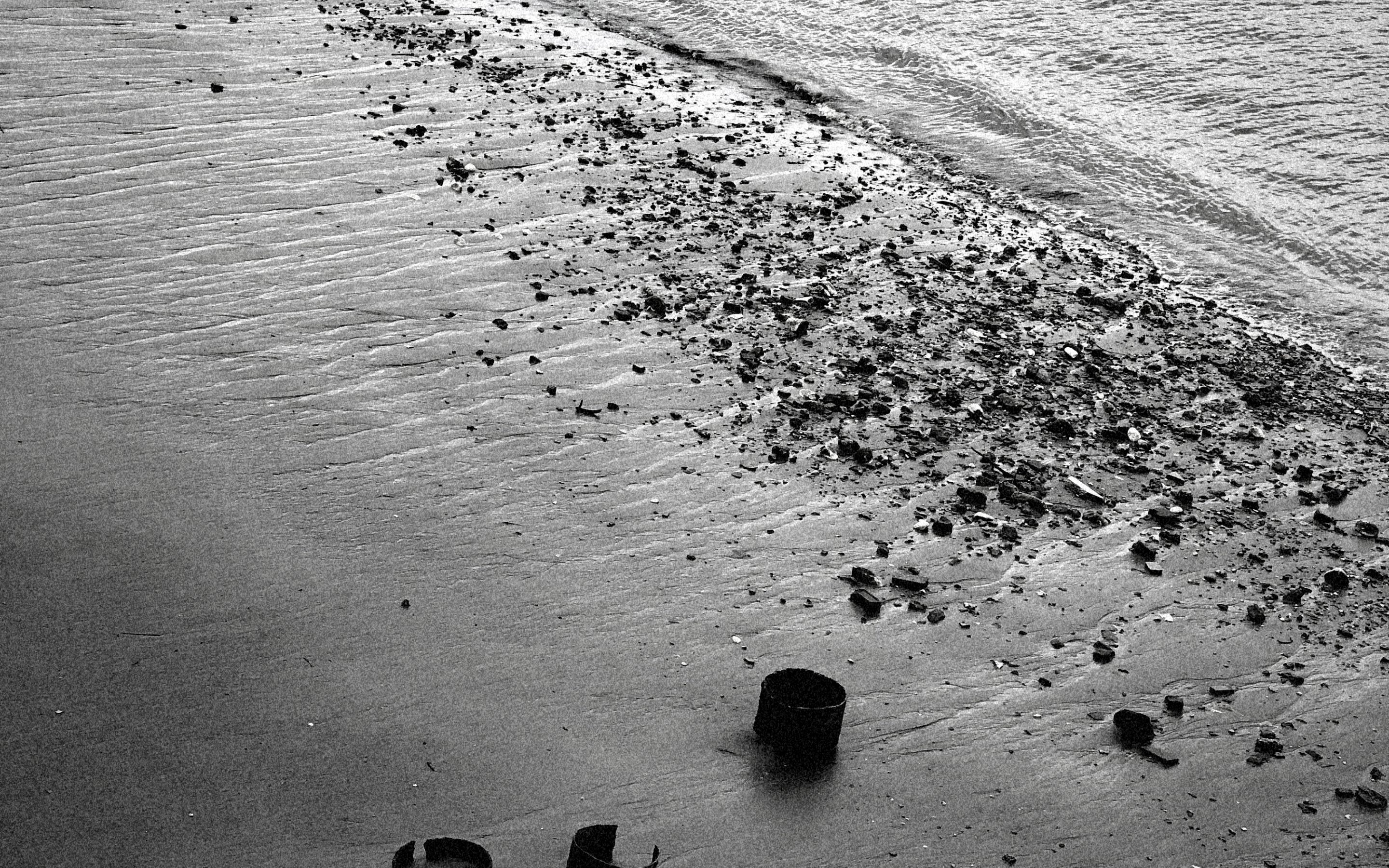 The following piece first appeared in print in Salvage #8: Comrades, This is Madness. Issue 8 is available to buy individually here. Our poetry, fiction and art remains exclusive to the print edition, and our subscribers have exclusive access to some online content, including all audio content. New subscriptions can be taken out here, and start with the next issue.

I’ve been wearing the same shit this whole time. I only (sometimes) put on a bra and makeup for video-call appearances or selfies to pretend on Instagram that I am not the type of person who could own more than one pair of decade-old weird quasi-capri Old Navy stretch pants/leggings. I have been rotating through the same four random t-shirts-turned-pajama-tops and never, ever, do I put on something acquired with any sort of careful, meditated aesthetic intention. My closet is a row of possible selves cordoned off.

In Sally Rooney’s Conversations with Friends, Frances tells Nick that he ‘doesn’t seem to have that relationship with yourself where you look at your reflection wondering if you look good in something.’ Nick replies, ‘I mean, I’m a human being, I try clothes on.’ This gets at something simple and true: the act of dressing is both an expression of the self and an obfuscation – a manner of controlling how one is perceived. (I try on clothes ergo sum?) So what does it mean that, stuck in our tiny apartments, there is no interlocutor? Even for those of us co-quarantining, the gaze of a partner, annoying flatmate, or unbearable relative is qualitatively different than moving through the public world, where interpersonal specificities are degrees removed. We are social creatures; selfhood is tied to how we see and are seen. And if clothing is an interface between body and world, what does it mean that there is no world from which someone else can do the seeing? (If a mesh top is worn during quarantine and no one is around to hear it, does it make a sound?)

For Walter Benjamin, fashion’s direct preoccupation with the body – its adornment, modification, visibility, legibility – meant a long conversation with death. ‘Fashion was never anything other than the parody of the motley cadaver, provocation of death through the woman, and bitter colloquy with decay whispered’. At a time when the ailings and failings of the body are so psychologically and physically central, it is no surprise that the ludic impulses behind dressing myself are squashed. The deliberate styling of the body skirts too close to the idea of the corpse.

People have pointed out how the pandemic is changing and distorting our relationship to our bodies – feeding them, cleaning them, their movement, where they reside and toil. Why should our relationship to how we cover and decorate them be different? Most directly, gloves, masks, and PPE have taken centre stage as medical necessities, their lack violations of dignity and the right to safety for the sake of profit.

Dress is a way to understand how we live. Our bodies are our selves. As Shahidha Bari writes in Aeon, ‘for all the abstract and elevated formulations of selfhood and the soul, our interior life is so often clothed. How could we ever pretend that the ways we dress are not concerned with our impulses to desire and deny’?

Fashion expresses the political landscape of the present. Benjamin quotes Friedrich Theodor Vischer to describe the nineteenth-century crinoline as ‘the unmistakable symbol of reaction on the part of an imperialism that spreads out and puffs up … and that … settles its dominion like a hoop skirt over all aspects, good and bad, justified and unjustified, of the revolution. … It seemed a caprice of the moment, and it has established itself as the emblem of a period, like the Second of December’. If the crinoline’s expansiveness, fortification, and usurpation of space gestures toward the birth of modern empire symbolised by the coronation of Napoleon, then it is not so far-fetched to say that my dishevelment and lack of interest in dress may gesture toward the crumbling of the everyday, the existential crisis coming to a head. Why shouldn’t the lauded video-conferencer’s nice-shirt-no-pants combo (or, in my case, the ugly-shirt-no-pants combo) be meaningful?

Unsurprisingly, plenty of those in the sweatpants-for-days category are, unlike me, enjoying it, denouncing their former selves for ever having worn jeans. A meme of a child crying as she brushes her hair – ‘me getting ready to join a Zoom meeting for something that should have been an email’ – circulates. Ditto a screenshot of a tweet: ‘we may be quarantined but our boobs are finally free’.

There is plenty of evidence, too, suggesting another pole to the quarantine-fashion spectrum. The impulse to dress up, particularly in ways not indulged pre-coronavirus, is on full display. One acquaintance posts a Facebook status about randomly wearing   ball gowns in the evenings (I must have forgotten to stock up on those). The BBC informs me that Izabela and Lucas Pitcher don historical costumes and walk around their Buckinghamshire village. Fellow villagers wave at them from a distance. The playfulness and pleasure of clothing is clearly not lost for all.

At the same time, Instagram urges me to buy $40 dresses with algorithmically conjured slogans such as ‘work from home, but make it fashion’ and my partner keeps succumbing to ads for ‘boxers with pockets’ (they’re called Jambys, if you’re looking to invest). Because clothing is also a multi-trillion-dollar industry – Marx’s recurrent and enigmatic boots, coats, and linen. It is an industry that does to our sense of self what capitalism does to everything else: takes it from us, deforms it, and tries to sell it back.

Whole markets have existed since at least the mid-nineteenth century to tell us what we should and are expected to wear, to work, to school, to the store, to a wedding, to the beach, and, yes, in private or as we sleep. But the expansion of such instruction to all realms of public life – coinciding with the extension of the non-domestic to the home and vice versa through privatisation, cuts to social services and growth of service sectors – has also meant the rise of sleepwear, loungewear, athleisure. And retailers have, of course, exploited the pandemic. Companies have doubled down on churning out and promoting loungewear, leisurewear, and sleepwear – clothing that customers are still buying, while sales in practically every other garment category have declined.

Clothes, like all commodities, are congealed objects of labour – alienated from the workers who make them and those who wear them, while the intricate webs of social and labour relations, involving monstrous abuses, are made unintelligible, almost mystical, along the way. (Etymologically, to fashion, to fabricate, is to do, to make, the latter from fabrica, meaning workshop or place of production. Homo faber indeed.) In all of this, the aspirational lifestyles and personas clothes project to potential buyers mingle with the psychological and affective needs unfulfilled by our society. As expectations of productivity, constraining and disciplining the body, and business-as-usual face off against the meltdown of whatever separates wage labour outside of the home and unpaid domestic work within, the question of the function of clothing in society cracks open.

I stumble around my apartment, my weird leggings clinging to my stiff legs. How many of us cannot usually dress how we want to in our daily lives? Dress codes, spoken or not, mediated by things like gender, race, and sexuality, abound. Some of us have to wear heels or a tie in order to be taken seriously, others only things in which they can get dirty and move comfortably. Still others may choose to forgo specific articles of clothing for safety’s sake – so they don’t get harassed, bullied, or killed. These things may still be true in quarantine, and the sense of security we feel or do not feel where (if) we are sheltered is important for how we live through this. But it is also true that quarantine has altered the matrices through which we typically make decisions about what to wear.

As well as protection, modesty, and ornamentation, there is, then, as Barthes puts it, another function to clothing, ‘which seems to me to be more important: the function of meaning’. The experience of feeling freer to express oneself through dress in quarantine, of feeling like a sack of potatoes and hating it, of never having felt more comfortable in a pair of pants for so many days in a row – all are expressions of this collective moment of heightened embodiment, of meaning, of a profoundly societal and (anti)social process.

The contemplation of clothing is often – very much including on the left – considered frivolous, vain, even shameful. And under these circumstances, all the more so. To be concerned with the unworn state of my precious thrift store finds, at such a devastating time, seems trivial, out of touch. When the preservation of life is in crisis, why make room for anything else, even or especially the moulding and channelling of the self?

But it is precisely in moments of despair that sensuousness, what makes us human, is most at risk. Have we not found that part of the current tragedy is the impoverishment of the sensory? The denial of air on our faces, the touch of a friend or lover, the smell of spring, the exchange of conspiratorial glances on public transit? Why else is the New York Times finally admitting that selfie nudes are high art? Are not all the posts about homemade bread and TikTok dances, entertaining or annoying as they may be (to each their own), perfectly sensical responses to a world in which visuals, sounds, touch, scents, tastes – if we are lucky – have been dulled and mediated through a screen? How we dress and undress is at the heart of aesthesis, of how society transforms our subjectivities, of life under capitalism.

The world should be organised in a way that maximises our subjective potential rather than repressing, neglecting, vanquishing it; pleasure and beauty must be fought for. We need universal health care, housing for all, living wages, a green new deal, decarceration. We need all of that and more. The struggle for a world that gives a damn about us is a battle that also encompasses the poetry, the art, the solidarity, the humanity – the glimmer of hope – that will get us through as we die alone, get laid off, have no place to go, and feel nothing but uncertainty. And it is a battle that encompasses our clothes. Hearts starve as well as bodies. What is dress if not a way to voice the intricacies of these privations?

Camila Valle is a socialist and writer based in Brooklyn. She is the assistant editor of Monthly Review.