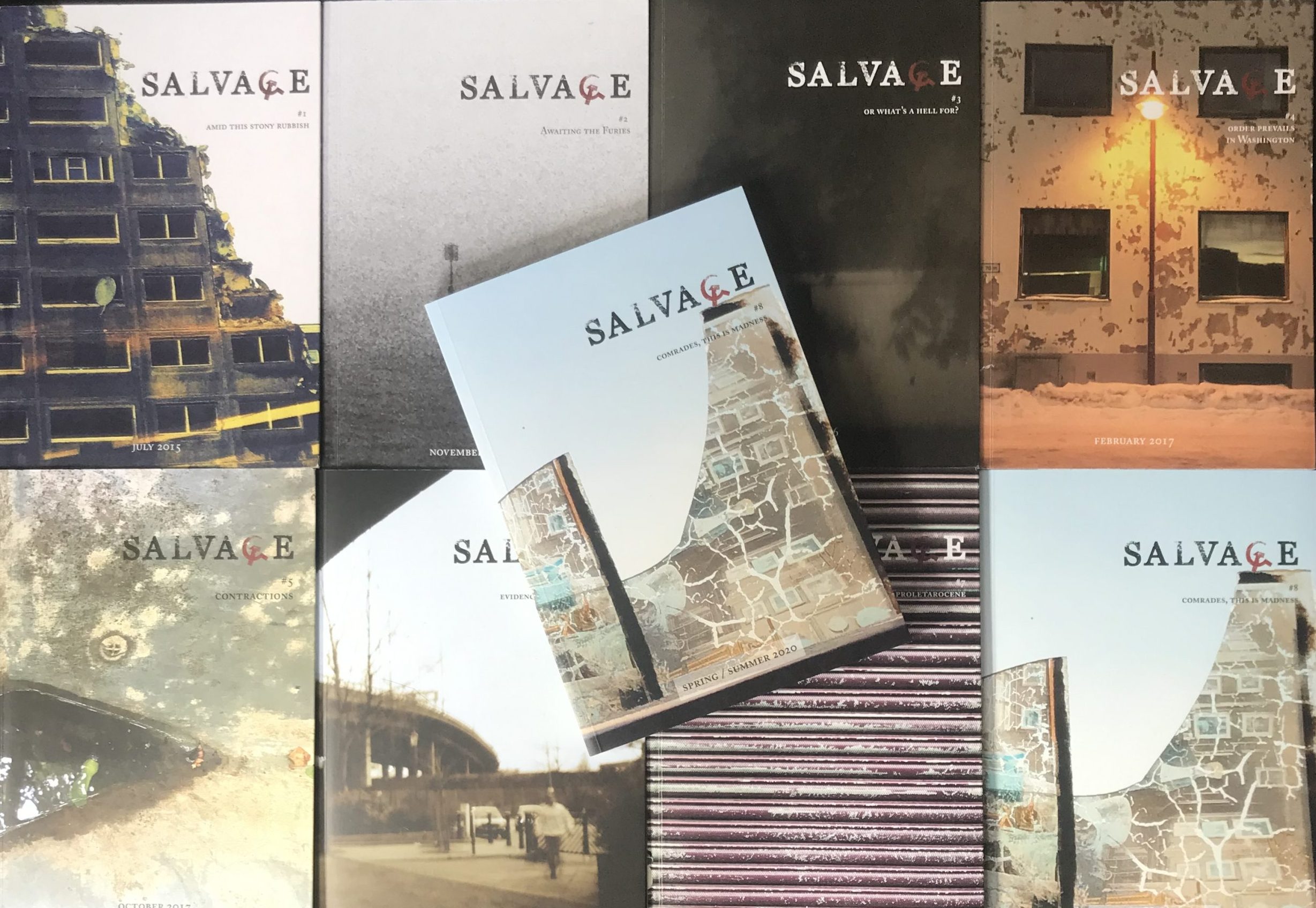 Salvage is a bi-annual journal of revolutionary arts and letters.

Salvage is written by and for the desolated Left, by and for those sick of capitalism and its planetary death-drive, implacably opposed to the fascist reflux and all ‘national’ solutions to our crisis, committed to radical change, guarded against the encroachments of ‘woke’ capitalism and its sadistic dramaphagy, and impatient with the Left’s bad faith and bullshit.

Salvage has earned its pessimism. There is much to be pessimistic about. Fascist politics have not enjoyed a better climate since 1945. The climate crisis is under way and bringing with it yet further fecund material for a reconstituted far-right. The organisation and militancy of the working-class continues to fray, as does the revolutionary tradition. Hope is still precious; it must still be rationed.

Yet, having yearned for our pessimism to be proved wrong, and been giddied by Evental shifts which allow for habitable outcomes to be war-gamed, Salvage is tentatively open to a more generous ration of hope.

Salvage, recognising that the catastrophe is already upon us, and that the decisive struggle is over what to do with the remains, is for a communism of the ruins.

Salvage is committed to publishing the best radical essays, poems, art and fiction without sectarian, stylistic or formal constraint. Salvage requires only that they cleave to liberation.

If Salvage is not in your favourite bookshop, please request that they order it in!

ADVERTS
Salvage accepts adverts from, and places adverts with, political and/or cultural projects and publications that we admire. If you would like to run an advert with us, please contact us at admin@salvage.zone.

Salvage is a non-sectarian, non-dogmatic Marxist quarterly, and we encourage contributions from across the radical and revolutionary traditions: not only from those identifying with socialism, but with feminism, anti-colonial politics, anarchism, queer activism, liberation theology (of any faith tradition), and others. We seek the solidarity of, and contributions from, all committed to building a habitable left culture.

As a matter of principle, we offer payment to all our poets, artists and writers. Our current rate is £100/$150 per print contributor.